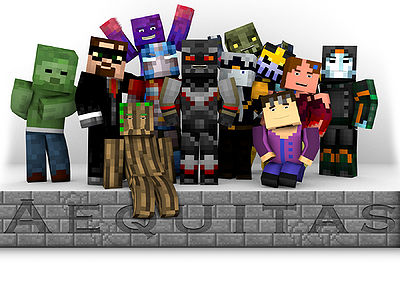 'Aequitas' is a Latin word that describes the ancient Roman code of justice, equality and fairness. It represents the core values of our guild where all members are equal and none leads alone; where honesty and fairness are considered to be of utmost importance, both within the guild and in our dealings with others; and where just and ethical behaviour is encouraged at all times.

We are a group of close-knit players from around the world - USA, Australia, Sweden, Austria, Germany, Denmark and England - who have met and developed friendships through MineRealm. We keep in touch via a very active Skype chat and regularly have several guild members in-game chatting up a storm.

Most members of Aequitas are well established veterans, and we each have our own areas extending into all four corners of the map. As such we don't have a guild home at present, however it's pretty common for us to pitch in and help each other with builds and resources. It's a nice synergy between independent projects and a collective effort.

Aequitas is not looking to expand, but if you are that extra-special person who's close buddies with most of our members and you're keen to join, let us know. All our members need to be comfortable with new members being accepted into the guild, so please don't be upset if you're knocked back.