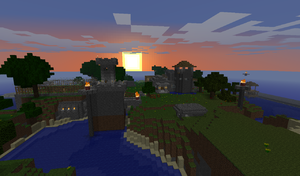 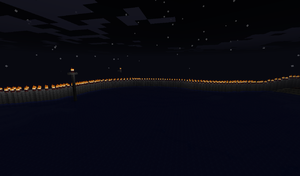 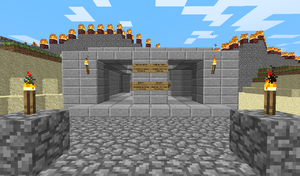 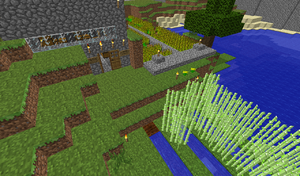 Findale Manor is the industrial center of the realm. The manor also servers as CirJohn's current home. The manor includes CirJohn's workshop, a small decorative mansion, multiple farms, a portal, a sky-castle, a tunnel to the eastern "Fire Gate", a slime farm, and the entrance to Findale's largely unused mines.

The Great Wall of Findale

Findale is surrounded by large wall featuring regular lighting and a wall walk with access at every gate. To date, the Great Wall encompasses dozens of plots and is the largest surface structure on the survival server.

Findale provides shelter to homeless players on a limitted basis. Only one player is given shelter at a time, and players may only use the shelter for a maximum of seven days. Residents are expected to use this time to earn the credits needed to start a realm of their own. A few more rules apply - specifics will be given upon request.<br\>

CirJohn is currently constructing a subway line running from Findale to the original spawn area. Current plans include a connection to the Spawn City town square. The subway will be available for public use, with the intention of branching out into the entirety of the north east.

Deathtrap Dungeon is an adventure-style dungeon being constructed beneath Findale. The entrance is near the subway terminal, just past Findale's western "Glowstone Gate". Upon completion the dungeon will have prizes available for any player to reach the end.

Work has begun on an airstrip, with the intention of launching attacks against evil airships and vile zepplins throughout the realms.<br\>

Findale has a small but elite force of near-suicidal covert operatives which occassionally assist Findale's allies in battle. It should be noted that the Recon Squad is only a vangaurd. It it speculated that the Imperial Army has a core force of super-charged creepers hidden somewhere within its borders, as well as three mercinary ghasts providing artillery support.(br\>