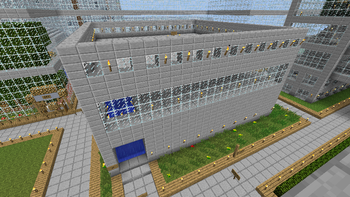 Minerealm's survival server is the first of the three SMP servers which Minerealm obtained. This is a legit SMP server, which hosts a mod which allows players to create "realms", which are the cities of Minerealm. This server can hold up to 150 players at a time.

MineRealm 1.0 was the first Survival server, after health and mobs could be enabled on SMP. Prior to this, minerealm hosted a creative server.

MineRealm 2.0 was the first installment of Intelli's custom server plugin. The system allowed players to create a 30x30 realm that was essentially theirs. They could add other members and leaders to the realm. Each player could only have one realm, and only be a member of one realm. Realms were also free in this version, and realms would expand dynamically as blocks were added to the realm.

MineRealm 3.0 is the system as we know it today. Players earn credits for breaking and placing blocks, and can purchase a realm for 10,000 credits. Players can lead any amount of plots, and be a member of any plots they wish. Within a plot, non-members cannot do anything. Opening chests is even deactivated for them. Each plot is 50x50. (Plots are currently former realms)

Minerealm is currently in 4.3 and some of the major changes are: parties are now guilds, a new spawn, and new chat format